The Yoga Of Menopause - Alternatives To Hormone Therapy 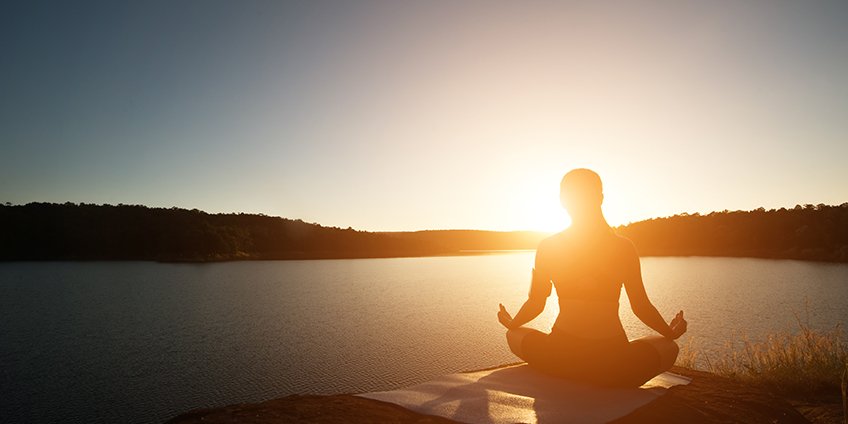 Susun Weed maintains: “Menopause is not a ‘pathology,' but a passage to power. Like puberty, menopause is a natural – and healthy – change. Wise women the world over herald menopause as a health-promoting event. They see hot flashes as ‘power surges’ and menopause as an intense spiritual journey. Most treatments – including ERT, HRT, isoflavone, and progesterone creams – disrupt this process and can do severe damage to a woman’s health.”

The energy aspects of menopause are of special interest to me.

As a long-time student of yoga, I was struck by the many similarities between menopausal symptoms and the well-known esoteric goal of "awakening of the kundalini." Though the ideas presented in this section may seem strange or difficult to comprehend, they contain powerful messages about menopause, which lie at the heart of the Wise Woman approach.

Kundalini [is] the root [of] all spiritual experiences ... Kundalini is a special kind of energy known in many cultures, including Tibetan, Indian, Sumerian, Chinese, Irish, Aztec, and Greek. Kundalini is said to be hot, fast, powerful, and large. It exists within the earth, within all life, and within each person. Psychoanalyst Carl G. Jung called kundalini anima. Kundalini is usually represented as a serpent coiled at the base of the spine, but women's mystery stories locate it in the uterus - or the area where the uterus was, if a hysterectomy has occurred. During both puberty and menopause, a woman's kundalini is difficult to control and may cause a great number of symptoms.

East Indian yogis spend lifetimes learning to activate, or wake up, their kundalini. This is also called "achieving enlightenment." When they succeed, a surge of super-heated energy goes up the spine, throughout the nerves, dilating blood vessels, and fueling itself with hormones. As kundalini continues to travel up the spine, it changes the functioning of the endocrine, cardiovascular, and nervous systems. Not just in yogis, but in any woman who allows herself to become aware of it. Menopause is a kind of enlightenment. Hot flashes are kundalini training sessions.

Taking Hormones? These Herbs Are For You

More and more American women are using herbal remedies to help them with menopausal problems. Those who do take ERT (estrogen replacement) or HRT (hormone replacement) may be surprised to discover that herbal medicine has a lot to offer them as well.

Herbs for women on ERT/HRT include those that alleviate side-effects as well as those that counter problems caused by the hormones.

Water retention is the symptom most often cited for dissatisfaction with hormone replacement. Herbal tinctures and tea, such as dandelion or cleavers, and ordinary foods can not only relieve the distress, they will go to the root of the problem and help prevent recurrences.

Dandelion root tincture (Taraxacum officinale) strengthens the liver and helps it process out the excess hormones you are taking. When the liver works well, the kidneys work better, and tissues no longer bloat. A dose is 10-20 drops in several ounces of water or juice 2-3 three times a day. If you have any digestion problems, take your dandelion before meals; otherwise, anytime is fine. You can safely take dandelion daily for months or years if you need or want to.

Cleavers herb tincture (Galium molluga) tells the lymphatic tissues to get moving. Relief from edema is usually rapid when 20-30 drops are taken in several ounces of water or juice. Repeat up to six times at hourly intervals if needed. Cleavers is especially helpful for easing swollen, sore breasts.

Headaches are the second most common side-effect of hormone use. Unfortunately, they are common among menopausal women not taking hormones, too. Herbs that help relieve headache without a drug-like action - such as dandelion, yellow dock, milk thistle, burdock, garden sage, skullcap, and St. John's/Joan's wort - are generally considered safe to take with hormones.

Chinese herbalists say headaches are caused by liver stress. My favorite liver-strengthening herbs are dandelion, yellow dock, milk thistle seed, and burdock. I use one at a time, a 15-25 drops of the tincture several times a day, for two weeks. If symptoms continue, I switch to a different herb.

A strong tea of garden sage leaves (Salvia officinalis) offers immediate relief from headaches and helps prevent future ones. It also reduces night sweats. Tinctures of skullcap (Scutellaria lateriflora) and St. Joan's/John's wort (Hypericum perforatum) ease pain and relieve muscle spasms. Use 5-20 drops of skullcap and a dropperful of St.J's at the very first sign - no, the very first thought - of a headache. Repeat the doses every five minutes until pain free. Skullcap can act as a sedative, especially in large doses.

Breast cancer risk is increased 20% in women who use ERT for five or more years. Use of HRT for five or more years increases breast cancer risk by 40%. Each five years of continued use increases the risk. In addition, women who take ERT are far more likely to get uterine or endometrial cancers. All women on hormones increase their risks of lung and ovarian cancer, too. Nourishing herbs such as red clover, and foods such as beans and yogurt, offer easy ways to stay cancer-free.

Red clover blossoms (Trifolium pratense), when dried and brewed into a strong infusion (one ounce herb steeped an a quart of boiling water for at least four hours) prevent cancer by providing phytoestrogens that counter the cancer-promoting effects of oral hormones. Usual dose is 2-4 cups a day. The infusion tastes like black tea and can be flavored with mint if you like.

Since uncooked beans and unfermented soy contain anti-nutritional factors that may promote bone loss and dementia, soy "milk" and tofu are not recommended. Miso and tamari definitely help to prevent breast cancer but soy isoflavones may promote it.

Yogurt helps build powerful immunity. Women who eat a quart of yogurt a week have 700% less cancer than women who eat no yogurt.

Dry eyes afflict more than 9% of women using ERT and over 7% of those on HRT. Risk increases by 70% for every year of continued use. And the longer a woman uses hormones, the greater her risk. Herbs such as oat straw, chamomile, and chickweed can help relieve and prevent this problem.

Oat straw infusion (Avena sativa) cools and moistens your eyes from the inside out, builds strong bones too. Use one ounce of dried herb in a quart jar; fill to the top with boiling water and cap tightly. Let steep four or more hours. Dose is 2-4 cups a day. Refrigerate after straining.

The ultimate ally for women with dry eyes is fresh chickweed (Stellaria media), applied as a poultice to the closed eyes. Leave on for five minutes, or until the plant material feels warm (it will heat up). Repeat as needed.

Stroke and heart attack are actually increased by use of ERT/HRT, though modern medicine has long proclaimed the opposite. Every major double-blind study done to date has created a larger and larger gap between ERT/HRT's supposed ability to help cardiovascular health and its actual results. Protect your heart with nourishing and tonifying herbs and foods such as motherwort, hawthorn, and cherries.

Motherwort (Leonurus cardiaca) tincture helps the heart. The Japanese claim it is their secret of longevity. A dose is 5-15 drops, twice a day. Motherwort also relieves hot flashes, calms tachycardiia, and eases anxiety. It's an all-in-one remedy for menopausal women.

Hawthorn (Crataegus oxycantha) flowers, leaves, and fruits are all used to maintain heart health and control fluid build-up in heart tissues. A dose is 20- 30 drops of tincture 2-4 times a day, or a cup of tea with meals. This widespread shrub is considered one of the finest heart tonics in the world.

Cherries are even better than apples at keeping the doctor away. Dried cherries and cherry juice, even tincture of cherries.

More than three-quarters of the women in America over the age of fifty have refused ERT/HRT. If you want to join them, taper off your dosage slowly, while continuing to use nourishing and tonifying herbs such as dandelion, motherwort, red clover, oat straw, and seaweed.

There are Many Types of Estrogens

Pharmaceutical companies make estrogens from substances such as horse urine, wild yam roots, and petrochemicals. Tamoxifen, used to treat and prevent breast cancer, is a type of pharmaceutical estrogen.

Women make at least thirty types of estrogen, including estradiol, estrone, and estrace. Estradiol is the strongest; it is turned on at puberty and turned off at menopause. Estradiol is positively linked with breast cancer; other human estrogens are not. Anything that reduces the amount of estradiol a woman produces (such as pregnancy, lactation, early menopause, and late puberty) also decreases her risk of a breast cancer diagnosis.

Phytoestrogens counter the detrimental effects of estradiol by competing for the same receptor sites.

To get the greatest benefit from phytoestrogenic foods and herbs remember:

1. Isolated phytoestrogens are not as safe as those "in matrix."
2. To make use of plant hormones, you need active, healthy gut flora.
3. Herbs and foods rich in phytoestrogens need to be used in different ways.
4. Phytoestrogens may have different effects on women who do not have their ovaries.

1. Plants contain many types of phytoestrogens; additionally, they contain minerals and other constituents which help our bodies modify the phytoestrogens and so we can use them safely. Red clover is mineral-rich and contains all four of the major types of phytoestrogens: lignans, coumestans, isoflavones, and resorcylic acid lactones. It is the world's best-known anti-cancer herb. In general, foods and herbs rich in phytoestrogens, with the possible exception of licorice, show anti-cancer abilities. Isoflavone, however, when isolated (usually from soy) has the opposite effect: in the lab it encourages the growth of breast cancer cells.

2. Plant hormones, including most phytoestrogens, can't be used by humans. But we can convert them into ones we can use - with the help of our gut bacteria. When women take antibiotics, their excretion of phytoestrogens plummets. Get your gut flora going by eating more yogurt, miso, unpasteurized sauerkraut, homemade beers and wines, picked-by-your-own-hands-and-unwashed fruits and salads, sourdough bread, and whey-fermented vegetables. (See Nourishing Traditions by Sally Fallon for whey-fermented vegetable recipes.)

Phytoestrogenic foods are the basis for a healthy diet and a long life. The first food listed is the highest in phytoestrogens. The best diet contains not just one but many choices from each list:

Phytoestrogenic food-like herbs are generally considered longevity tonics. For optimum effect, use only one from the list below and to stick with it for at least three months.

Phytoestrogenic herbs are usually too powerful for long- term use. From the list below (which is in alphabetical order), it is safest to use only one herb at a time, and use it only when needed, although that may mean daily use for several months. More information about these herbs, including specific dosages and cautions, is in New Menopausal Years the Wise Woman Way.

4. Most of the warnings about phytoestrogenic herbs center on their proven ability to thicken the uterine wall in animals who have had their ovaries removed. This could encourage cancer, just as taking ERT encourages cancer of the uterus by stimulating cell growth. Women without ovaries are probably safe eating phytoestrogenic foods, but may want to use phytoestrogenic herbs - especially ginseng, dong quai, licorice, red clover, and wild yam - in small amounts and only for short periods.